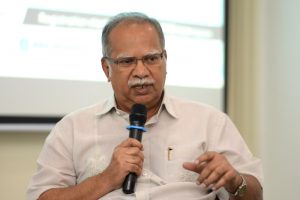 In yesterday’s press release by a Tamil publication, Tamil Malar, it was alleged that MIC leader and current deputy minister for youth and sports, M Saravanan, brought in thugs to confront the staff of the publication.

In the confrontation that ensued, the editor-in-chief of the publication, K Saraswathy, a lawyer by profession and the owner Oms Thiagarajan, a businessman, were assaulted by the thugs.

The confrontation resulting in the assault was related to a series of articles that Tamil Malar carried recently questioning the missing funds in the rental collection of the state MIC building.

For a few years, the relationship with the MIC leaders was not that cordial. Tamil Malar is known to be highly critical Tamil publication that to date has exposed some of the misdeeds of those who claim to be leaders of the Indian community.

Saraswathy is prolific writer. She is known to be fearless in expressing her opinion when it comes to matters that affect the welfare and welling of the Indian community.

Thiagarajan is a well-known businessman in the Klang Valley. He donates funds to charitable, cultural and social activities.

Yesterday’s assault further confirms the long held suspicion that some of the MIC leaders use gangsters and thugs to intimidate their opponents.

I understand police reports have been made and I hope that the new police head would order for investigation with fear or fervour. He should not “cover up” like the former head.

The general election is around the corner and the MIC is hoping to win as many seats as possible.

However, this incident will mean that the Indian public will have little or no confidence on the party for promoting gangsterism and beating up people simply because they don’t agree with you.

The longer the prime minister keeps Saravanan as a deputy minister, the Indian community will have little or no faith in his administration.

Tweets by dapmalaysia
Scroll to Top